Coptrol in Effluent and Waste Water

You are here: Home1 / Uses2 / Coptrol in Effluent and Waste Water

Because an effluent lagoon is a highly eutrophic environment, with large amounts of organic matter being regularly pumped into the lagoon there are 6 critical questions that should be answered before considering algal treatment. 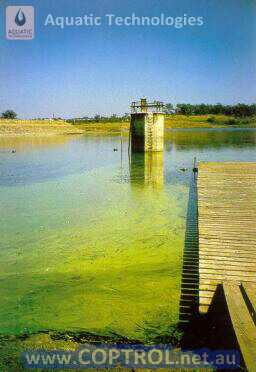 There is some evidence in the literature confirming algal concentrations do inhibit evaporation rates. It is dependent on a number of variables that are often  specific to the locality.

Do the algae assist with the breakdown of biomass and organic pollutants?

When considering the nature of the environment, concentration of biomass involved and the normal respiration cycle of an algal cell, the argument that high levels of algae will assist in the breakdown of organic biomass is difficult to sustain.

When considering the nature of the environment, concentration of biomass involved and the normal respiration cycle of an algal cell, the argument that high levels of algae will assist in the breakdown of organic biomass is difficult to sustain.

What is the likely environmental impact of killing the algae?

The consequence of killing such a large volume of algae needs to be understood before action is taken. The sudden death  of this number of algal cells is likely to result in the following:

There are various methods of treating algae to consider.

Use of Copper sulphate in effluent systems.

A review of the chemistry of this approach is outlined below:

It is the Cu++ that is toxic to algae; however, its persistence in this form has a very limited duration. Cu++  reacts with carbonates and hydroxides in solution to form insoluble copper compounds which have no algal toxicity. In most cases only 5% of the Copper ion from Copper Sulphate remains in the Cu++ phase for 60 minutes. Most is lost as an insoluble form in less than 60 minutes and never comes in contact with the target algae.

Use of Copper sulphate and hypochlorite in effluent systems

Hypochlorite, does not work as an efficient algaecide in fresh water. When used in an organic rich environment such as effluent it is even less effective.

Use of Coptrol in effluent systems
Coptrol has a number of major advantages.

Coptrol is a liquid designed to remain stable in highly mineralised aquatic environments without the risk of precipitation. It is ideally suited for use in effluent pond systems as these are usually environments high in carbonate and hydroxide anions.

Application rates will depend on the likely concentration of algae. Once the algal situation is brought under control lower rates of application can be used to ensure ongoing control.

Applying product over a large surface area will require either a large input of labour or aerial application. Dosing marginally effective copper sulphate from a boat is a highly labour intensive operation with the possibility of health problems for those exposed to the lagoon for prolonged periods.

Application of Copper Sulphate by air also has serious issues. Reacting copper crystals into slurry in an aircraft tank creates real potential for corrosion in an aeroplane. There is also the question of the even distribution of copper sulphate in such large volumes over such large areas.

By contrast Coptrol is a non corrosive liquid that can be readily applied by air over large areas. For example Coptrol is routinely aerially applied to rice production systems in Australia.

Coptrol works by accumulation of copper in the algal cell. The chelate acts as a nutrient source for algae. This ensures the algae keeps accumulating copper until it becomes toxic to the algae.

The chelate protects the copper from precipitation. Coptrol is approved for use in potable water supplies in Australia.

In summary Coptrol is easier and cheaper to apply than the alternatives and has a proven record dealing with algal problems in effluent systems.

Please Contact Aquatic Technologies should you have any further questions on 0409 180 707.