You are here: Home1 / Uses2 / Coptrol in Aquaculture

How to use Coptrol to control Algae in Aquaculture

Free floating and filamentous and blue green algae, (cyanobacteria) are a constant problem in aquatic environments.

In the nutrient rich, oxygenated waters found in aquaculture algal blooms compete with fish and crustacea for: 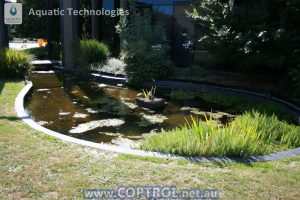 The use of Coptrol in aquatic environments is a more efficient and effective means of controlling algae than environmentally damaging copper sulphate (bluestone) because:

When Coptrol is used, protection from copper toxicity is provided where water hardness is more than 50 ppm (50 mg/litre expressed as calcium-carbonate). Below a level of 50 ppm of hardness, copper in a toxic form may be liberated thus harming fish and crustacea. Water hardness may be tested by using a commercial hardness test kit, or having a small sample (about 250 mL) tested in any NATA registered laboratory.
Water temperature is also important. Below 16°C (61°F) spatiation may occur where copper can separate from the chelating agent, potentially being harmful to fish and crustacea.

Application to fish impoundments: Decomposing algae that has been treated with Coptrol may lead to oxygen depletion of the water. Lack of oxygen may cause fish to suffocate.

Effects of copper on fish

A large number of studies have been conducted on the toxicity of copper to fish, whether the copper is naturally occurring or introduced.

Note ‑ the label cautions against the treatment of waters containing trout and other species where water hardness is lower than 50 ppm.

Moore (1984), Stiff (1971) and Pagenkopf (1974) are in general agreement that ionic copper (Cu) and ionised hydroxides (such as CuOH) are the forms of copper most toxic to fish. Coptrol contains copper only in the chelated form, in contrast to copper sulphate which presents copper only in the ionic form.

Stiff (1971) noted that “natural” complexing of copper ions with glycine and humic substances caused some reduction in copper toxicity.

Sprague in 1968 suggested that the chelating agent NTA (nitrilo-triacetic acid) could be used as an anti‑pollutant to protect fish from copper poisoning.

Boyd (1979) reported that chelated copper algaecides are often recommended for application to soft water ponds to prevent copper poisoning in fish. He further noted that “The toxicity of the chelated (copper) compound to fish is less than that of an equal concentration of copper in copper sulphate, so that species with a high susceptibility to copper are not harmed in waters of low alkalinity”. Moore (1984) reported, “In copper polluted fresh waters, a maximum concentration in muscle tissue seldom exceeds 1 mg/kg wet weight. Because muscle residues are generally low; copper does not pose a threat to most fisheries, even those in polluted waters.

When Coptrol is used, protection from copper toxicity is provided where water hardness is more than 50 ppm. (50 mg/litre calcium carbonate).

If water hardness is below 50ppm, Coptrol use is not recommended.

Coptrol will eliminate a broad range of algae and control the growth of resistant species.

Coptrol will aid in the cure and control of diseases commonly found in shrimp. These include bacterial and gill diseases, tail ulcers and protozoan infections.

It is best to treat only 1/3 of the area at a time to avoid oxygen depletion of the water caused by decaying vegetation.