How to Control Algae in Rice Crops

Slime is a constant problem in rice crops!

Algae, or slime is a perpetual problem in rice crops in Australia and elsewhere. In some years it is so prevalent in the water that large slabs of algae cover the surface, smothering the emerging rice crop.

During the wet season, the conditions for algae growth are also enhanced as the water from rivers, creeks and reservoirs used on the rice crops, contain a higher level of background nutrients.

Algae is commonly present in irrigation water and generally the rate they multiply is balanced by natural degeneration. However, when the balance is upset through increased sunshine or by the introduction of extra nutrients, the rate of growth increases and the algae blooms become a problem in rice crops.

What are the effects of algae?

The obvious signs of algal bloom – great slabs of algae – are like the tip of an iceberg. Before algae are visually detected a lot of damage has already occurred to the crop at its most vulnerable stage of growth.

Inhibition of seedling germination and vigour – Plant pathologists suggest the possible effect of algae could be greater than that of fungi on germination during early growth of rice seedlings.
Uprooted seedlings – Respiratory and photosynthetic gases become trapped in the filaments tangled around seedlings, uprooting many seedlings which are not yet securely anchored.

Competition for nutrients – Slime lives and grows on the same nutrients as rice seedlings. In a blooming population the sheer numbers of algal cells are enormous and represent a severe drain on the available nutrients.

Seedling knock-down and smother – When filaments of algae are in huge numbers they smother and drown the emerged seedlings and a tremendous amount of damage has already been done. Remedial treatments will salvage the crop but it is obviously better to avoid this damage before it happens. A good seedling stand is essential for high yields.

In most cases action to eradicate slime is only taken when filaments are present in huge numbers. And the treatments available are limited. Generally farmers use water control or bluestone, both of which are drastic answers to a problem where a lot of damage has already occurred. 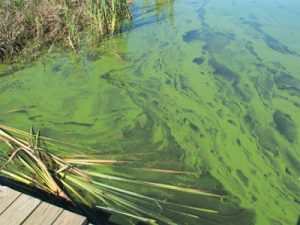 Coptrol is a new generation algicide which is so safe it is registered for use in human drinking water as well as in rice crops.

Coptrol offers a new approach in the prevention and control of free floating and filamentous algae in rice.

Since Coptrol is a non-corrosive viscous liquid it is extremely adaptable in application. Unlike bluestone, it can be applied as a PREVENTATIVE treatment prior to or immediately after sowing.

Coptrol can also be used in these ways as a REMEDIAL treatment for green and brown slime (which is usually blue green algae discoloured by degenerating plant material or suspended soil particles).